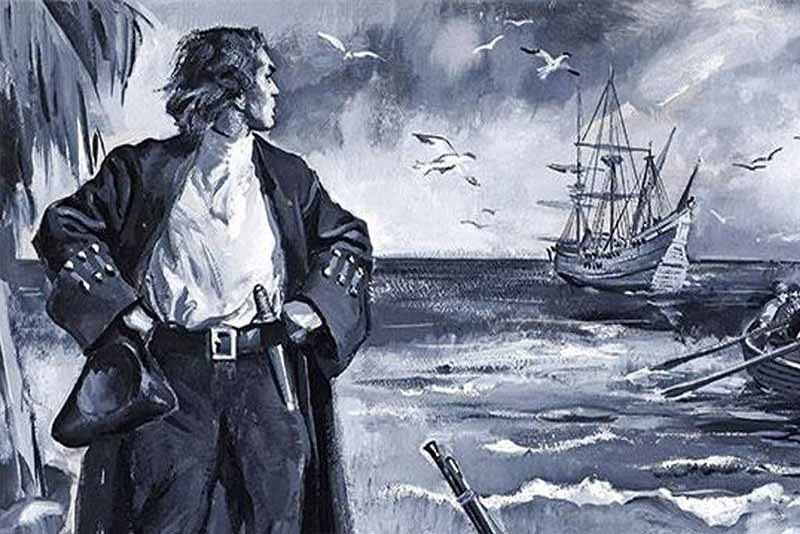 The real Robinson Crusoe that Daniel Defoe is said to have been inspired by when he wrote his famous novel was Alexander Selkirk. Selkirk was stranded alone on a desert island, Más a Tierra, off Chile in 1704 after getting into a fight with the ship's captain. There he remained alone for four years and four months, his only company being cats and goats he tamed. His dramatic story received much attention and became a best-selling book.

So how did Selkirk manage to survive on a desert island for so long?

Try to strand yourself on an island with a mild climate.

Más a Tierra was pure paradise to be stranded on. The climate was mild and largely dry all year round. There were no poisonous or dangerous animals, and the island was filled with springs of fresh and cold drinking water. Más a Tierra was also filled with good handy raw materials, wreckage, and pets from previous guests. The barrel straps from the barrels could, among other things, be turned into knives or furniture. The island also had good wildlife with, among other things, thick and lazy sea elephants that provided oil and skins that Selkirk could make mattresses from. The goats gave meat, milk, cheese, and skins. Selkirk is also said to have danced with the goats. The island was also filled with wild berries, nuts, and vegetables. Selkirk thus had no problem living a healthy life.

Ally yourself with the animals on the island

Selkirk had a tireless problem: the rats. They ran around everywhere and rubbed intensely on his clothes and hard skin. They were so many that the ground seemed to be alive. They were filled with vermin and spread their foul-smelling urine everywhere. Better for Selkirk, there were wild cats on the island that Selkirk could make good friends with and tame. He had soon managed to amass a private army of hundreds of cats. They did not leave him and slept spinning on his legs during the dark hours of the day. Their presence effectively kept the rats at bay.

During the first weeks and months, Selkirk could not understand how his comrades could leave him on a desert island. During Selkirk's first days, he was so hopeless that he could barely eat, drink or explore the island that had just become his prison. During the nights, he lay sleepless, afraid of being eaten by cannibals, of the dark shadows at the edge of the forest, of being eaten by some wild animal, or afraid of going mad because of the isolation. Several times he contemplated committing suicide. He drowned his grief by getting drunk and flipping through the Bible in an attempt to find comforting words. In the end, he became just skin and bones. Selkirk realized, however, that he is in control of his own mood. As long as he could stay busy during the day, he did not ponder his sad fate. And if he worked hard all day, he could easily fall asleep at night. Some examples of the many things Selkirk kept busy with:

Goats gave him his favorite dish that he ate almost every day: stewed goat with cabbage and fresh spices straight from nature!

Selkirk was able to build two huts with the help of branches, tree trunks, and grass. In one hut, he had his bedroom with carpets he made of goatskin, and in the other, he had made a kitchen.

He could light fires on bonfires by rubbing two pieces of wood against each other. So that the fire would not go out, he added new wood from fragrant sandalwood.

He often lay down in a mattress of sea elephant skin, read the Bible, and sang hymns. In the end, he became a better Christian than he had ever been.

In the end, life in nature had brought Selkirk into the shape of his life, and he was in a better physique than he had ever been.

After four years and four months, Alexander Selkirk was rescued by the pirate ship Duke. Selkirk had almost forgotten the spoken language, and the other crewmen thought he looked like a savage. With Duke, Selkirk went on a world tour with the pirates who had just rescued him, and after eleven years, he finally returned to his hometown. This time richer and better dressed than most. Selkirk, however, could never really get used to being back in civilization:

"I'm good for 800 pounds, but will never be as happy as when I did not own a single shilling" - Alexander Selkirk