Home / Blog / What you didn’t know about the barber pole 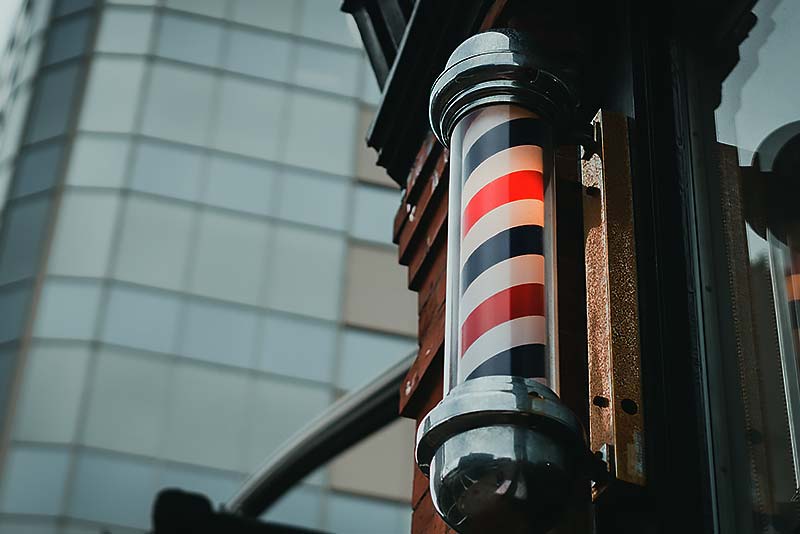 The classic, striped barber's pole is one of the most recognizable symbols on the planet and it serves as a guiding light for a barbershop - a place where gentlemen during friendly conversations can enjoy a classic wet shave, a new hairstyle or a beard haircut. But have you ever wondered about the meaning and symbolism of the barbers pole spiral design and its colors?

The history of the barber pole dates back to the Middle Ages before the development of modern medicine. During the Middle Ages, the church had a great influence on the art of medicine, and it was primarily in the monasteries that medical knowledge was managed and administered. But during the 12th century, the people of the Church were forbidden to engage in treatments that involved bloodshed, burning, and cutting. For natural reasons, these treatments were taken over by a professional group who were used to working with sharp instruments - the barbers.

Previously, barbers had, among other things, shaved the monks' tonsures and groomed their beards.

But now they also began to perform exciting treatments such as bloodletting (a very popular treatment during the Middle Ages that could be prescribed for almost all ailments), tooth extractions, emptying of abscesses, and war medical care such as amputation. Barbers thus became what we can call the surgeons' ancestors.

When the barber performed bloodletting, the patient held and pressed his hand on a bar to be able to expose his blood vessels, so that they became clearly visible to simplify the barber's work. This rod could have a ball of brass on top that was filled with leeches, and a bowl was held under the arm to collect the blood. After the bloodletting, bandages were wrapped around the arm to stop the bleeding and then around the bar.

To market their services, barbers could hang ropes with teeth’s in a row, as well as bowls of blood outside their barbershops. However, when this type of marketing was banned and barbers were ordered to discard customers' blood immediately, they had to come up with a new way to market their services. It was then that they instead began to hang out the bar that was wrapped with the bloody bandages used in bloodletting to market themselves. Over time, the bar was replaced with a more hygienic red and white pole - the classic barber's pole that we still use today.

Many modern barber poles have a blue stripe, which some historical sources cite as a tribute to the colors of the American flag. In Europe, the blue stripe was intended to distinguish barbers from surgeons, as the two professions gradually began to grow apart. It may also have differed geographically in Europe where some barbers in different countries had blue, red and white rods, while others only had red and white.

Sure, men's hairdressers and barbers have come a long way since the Middle Ages, but the barber pole is still an iconic representation of the industry.

How often do you not hear that the hair grows back thicker and darker after...